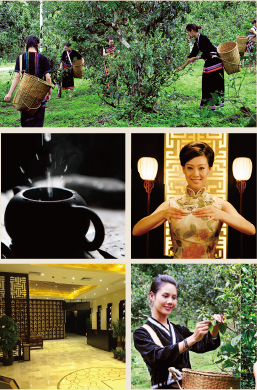 Beginning in 1772, on the ancient Tea-Horse Road has a long history of old, art of tea, tea and Tibetan tea knowledge century, Qing dynasty famous poem: "furious ming who as well, was assured of only the Qing". Century-old tea house, through the rise and fall of 1999 renewed glory, continuing a century tea house culture, heritage tea of Millennium civilization, is the predecessor of Nan Qing tea company.

In 2006, Nan Qing tea company in history was formally established on the basis of adhering to the "tea for you" professional tea philosophy, from the origin, production, research and development, aging, sales of the whole industry chain and dedicated individual, for the consumer to create the best, most suitable for Cup of tea.

Tea, from where it began——

Far away Earth, single side, South of the clouds, the Alpine nation. Nan Qing tea in the Brown mountain South Mu organic ecological tea garden was established, from the source of tea began to strictly implement the management, and South to the tea production with the highest quality raw materials guarantee. Tea, from the craftsmanship--the South successfully rebuild the century-old tea industry at the same time, followed the ancient legal system-its a perfect tea arts, ancient and mysterious essence of tea used in tea product uncompromising, make tea in color, aroma, taste and shape shows all aspects of superior quality, classic quality teas in the world.

Make wine capital of the tea industry in the South-the center of Dongguan has established the country's first tea make wine, launched a professional tea Pu-Erh tea 24 hour *360 ° on the intimate service created tea vitality index, make wine on a regular basis in the process of tea of multi-directional evaluation, charm to your tea Chen Huazhong, perfect transformation, make wine a perfect tea。

Structure of tea in the South set up close to the market and consumers, according to different times and different markets, different needs of people drinking, one of your exclusive tea, form diversified tea brand system, whether you are a professional hostess or young e, in the South, can be found in their own Cup of tea. South, good tea for you--we of core concept is "South, good tea for you", each a good tea are into has how effort, will nature of gives gift rendering to tea before, will a enterprise on quality pious not regrets of faith injected thousands of Cup in the, with pure good tea makes people get physical and mental enjoy, let thousands of years accumulation of tea culture glow glory.